What You Need to Know About Hyper Casual Games

What You Need to Know About Hyper Casual Games

Game designer / Business analyst with 4 years of experience. I want to open new worlds for all humanity.

Game designer / Business analyst with 4 years of experience. I want to open new worlds for all humanity.

Hyper casual is super popular and trendy in recent years. Though many game designers think that the main aspects of this genre were built a long time ago with the 70s and 80s arcade games. But the genre renaissance made hyper casual a game-changer on the market.

Why Are Hyper Casual Games so Popular?

That’s the clue to potential investors and entrepreneurs operating in the gaming industry who are seeking high app monetization.

Let’s uncover their main features, types of mechanics, ways of monetization, and how game development can lead to huge revenues. 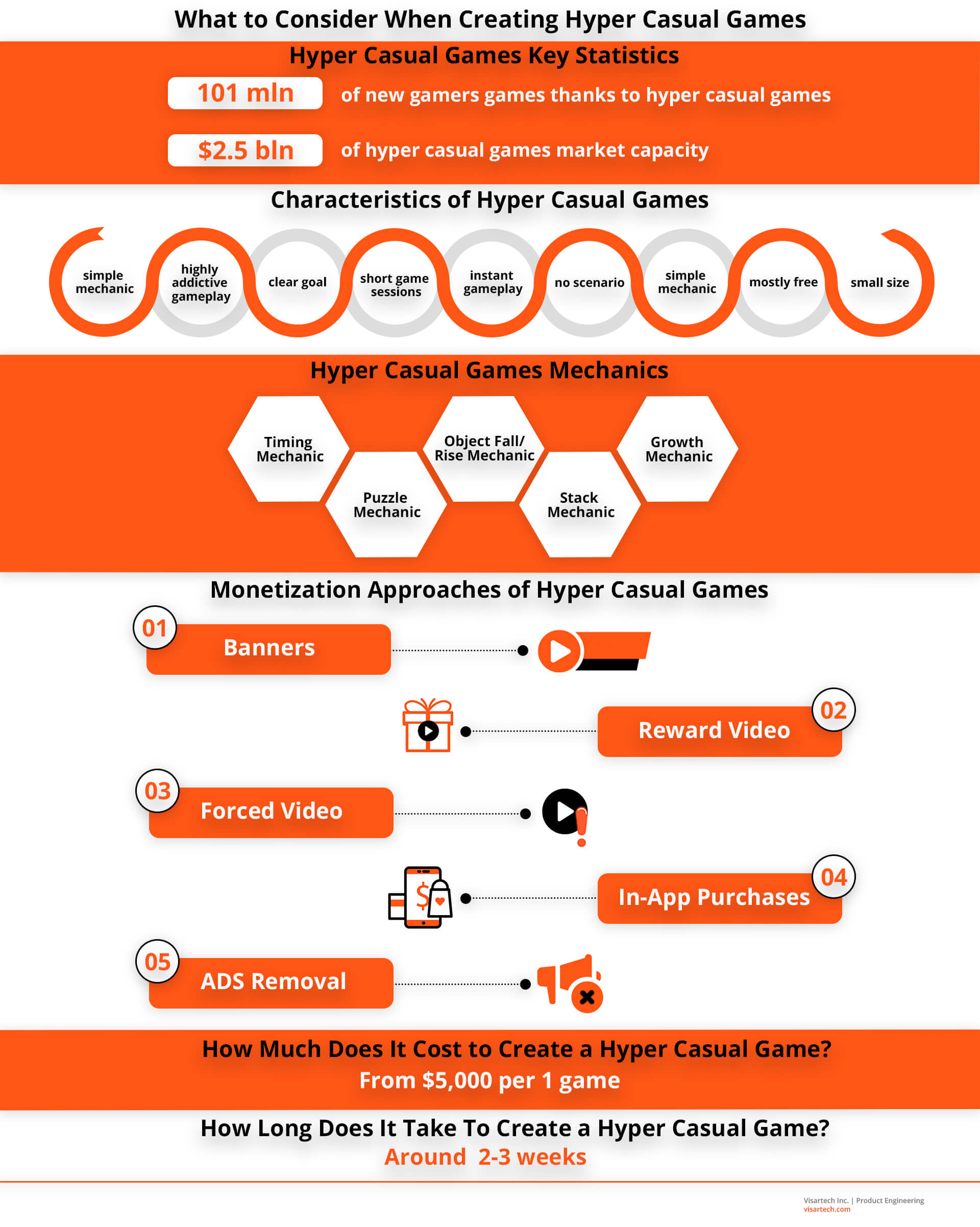 So What Is a Hyper Casual Game Now?

Hyper casual games, in a nutshell, are small games that have the next attributes:

So having just one mechanic onboard hyper casual games brings incredible user engagement. This results in high revenues from in-app purchases for their creators. Just check out the 7 best hyper casual games that have proven the statement.

As far as hyper casual games use one mechanic as a basis, it needs to be fun and catchy inherently. Obviously, there are a bunch of different mechanics and creative minds developing new ones every single second. Well, not every particular second, but you got the point. Let’s go through some popular ones.

Games where a player should tap the screen within perfect timing. It doesn’t matter what action it’s going to be performed – movement, shot, etc. – the response is immediate. This mechanic is based on reaction and accuracy, the ideal timing tap brings the best result for a player.

This mechanic requires logical thinking and planning from a player. It might be the hardest mechanics to design. As far as puzzle rules can be pretty strict and at the same time designer should think about replayability and the player’s progress.

In this mechanic, a player focuses on object protection during its falling or rising up. The player should avoid dangerous obstacles and different level barriers that usually hit the object instantly, so the gamer has to protect it as long as possible to get the best result.

Similar to the Timing mechanics, it is based on tap timing and accuracy. Usually, the player builds a column with the piece that goes from the sides on the top of the column and they cut it every time they stack not perfectly, so the next time the stacking place is smaller. The player should tap right in time so the piece stops right on the peace under it.

This mechanic expects a player to control the direction of the character\object movement and eat objects within the level to get bigger. The charm of this mechanic is revealed in multiplayer. As there are a bunch of players on the same level where the bigger ones kill smaller characters to get even more huge and be the real king of the hill.

Of course, there are many more types of mechanics in the hyper casual genre. At some point, game makers may feel safer using the popular mechanics in their games. Though at the same time, a new really fun mechanic created on their own that has never been seen before can bring huge success.

How to Monetize Hyper Casual Games

During the existence of the genre, there were some monetization approaches formed. But the main aspect here is based on the ads. Let’s go through the main monetization formats for hyper casual games.

A player sees the banner ads at the top or the bottom of the screen. The banners shouldn’t affect the user experience and can appear only in some situations: after the player beats the level, only on the main menu, etc.

This means that a player can receive some kind of bonus (skin, coins, etc.) or extra life to continue a game session after he/she watched video ads. It is absolutely voluntary for the player and perceived pretty positively by the player.

This format forces a player to watch video ads after each few game sessions. Usually, those are short videos that don’t have a negative effect on the player.

Providing users with new content and letting them buy it directly might be a good option. For example, many hyper casual games have different character skins that a player can get randomly. But there is also an opportunity to buy them for real money just in one tap. So it isn’t mandatory for the player to buy cosmetic items. Though if there is a desire, everyone has an option to do it and attain the favorite skin instantly.

A player can instantly turn off all the advertisements within a one-time payment. This option is more beneficial for game fans. But it is also a good option for publishers that get an instant check while players enjoy more pleasant gaming.

The described mechanics may be combined or modified to create something fresh new – a short and simple, yet satisfying hyper casual game.

How Much Does It Cost to Create a Hyper Casual Game?

There are various things that influence the total hyper casual game cost. Among such are:

The game development estimation and price may vary greatly. So you need to consider carefully all the aspects and allocate the best quality at the most reasonable price. Just in case, you’re already looking for available options, consider our special offer for hyper casual game development where you get 1 game within 2-3 weeks time for a price starting from $5,000. Got interested? Yeah, just like that!

It is important to find a perfect balance between the player’s fun and business revenue. Nowadays a correct approach and monetization format combination is more than a crucial decision for a popular hyper casual game.

If after all, you’re already counting potential profits from your own hyper casual game, make sure to prepare. IT experts advise exploring the market and creating a game prototype before its lunch for better testing and polishing the final game. Just to ensure its future success. The tech execution can be delegated to professionals.

Want to take a shot at benefiting a game of instant gaming fun and engaging entertainment? Have a word with us!

Thoughts on more fulfilling ways to do business.

Get valuable insights about tech solutions incorporated into business operating across multiple industries.

The days when we needed a gaming console or a PC to play games are long gone. Entertaining, beautiful games are at our fingertips. Let’s explore the world of hyper-casual games…

To create a particular atmosphere in any game, you need to make sure players are surrounded by proper sound design. Game audio helps to feel a wide range of emotions and provides immersive experiences. Here’s why…

10 Reasons Why You Should Write Technical Specification

Whether you plan on hitting the market with a new software product or making an app for your business, you should have your requirements straight. Here’s how you make a tech specification that…

We love partnering with businesses that have great ideas. Let’s start with yours!