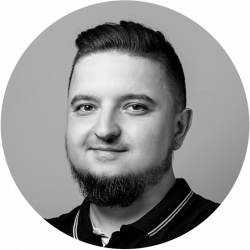 Sound design is not so much about making a game good-sounding but improving the game with sound.

Audio producers arrange great game sounds in a way that players don’t notice. The sound is just taken for granted, and indeed it is. The player doesn’t have any dissonances between things happening on the screen and sound perception during the game.

What Does Sound Design Stand For?

“The last 10% of game design is really what separates the good games from the great games. It’s what I call the clean-up phase of game design. Here’s where you make sure all the elements look great. The game should look good, feel good, sound good, play good.”

Sound producers make a game truly impactful through sound effects that fit the picture players see. This could be the sounds of the environment, echoes of objects invisible to the player, or the noise of potential opponents.

Sound design is the process of creating sound elements for video games. It includes music, voiceovers, foley, etc. Correspondingly, a sound designer’s responsibility lies in creating and setting up a variety of custom audio libraries that best fit a particular project’s needs.

The sound design aims to provide a player with an engaging and fun experience. That’s why sound designers convey the right feelings to the player following the game’s purpose.

Why Does Video Game Audio Matter?

Sound design plays an important role in video games. It helps to expand the experience that the player gets during the gameplay in a different way.

Generally, there are 3 main aspects of sound design used as a powerful tool in video games:

1. Information or tips about the world and what is happening around:

Listen to the example of the last one:

Just listen to how the rings collections sound:

The sound maintains a player’s emotional state by emphasizing the tense or relaxed atmosphere at a particular moment of the game. In survival horror you can observe the following:

Here is a good example of scary footsteps:

So having a great sound arouses the corresponding tone and mood in a video game, indicating the current location and giving feedback. Even simple sounds of footsteps can suit a neutral state of a game. Or suppose you hear someone walking slowly, grappling their feet – there is a certain tension, isn’t it? All these feelings that you experience happen thanks to the sound.

In-game audio effects have to be fun and exciting since they keep players involved. Different video game sounds can produce such an effect. Let’s go through the main ones.

It is an extended sound in the background. A player hears the sounds of leaf rustling, birds chirping, and creaking the forest.

The music emphasizes a certain mood of a particular scene or produces an emotional effect on people playing a game. For example, a player walks through the forest and ends up near the boss’s lair and the music informs the player about it at once.

Typical examples of such sound effects could be simple dialogues. Nevertheless, sound designers can also use voices for other purposes. For instance, a player has made a headshot, and the voice of the in-game commentator claims “Headshot!”.

Various sounds are designed to sharpen the player’s attention. It can be the sound of some spell-castling, a shot from a Tesla cannon, etc.

This could be the case when sounds match with the view a player sees. Let’s say we have an animation of pulling the sword out of its scabbard, and this character`s action is followed by a specific sound. So the scene wouldn’t be so effective without it.

Of course, there are many other ways to enhance the player’s experience through sound design. These are just the main ones that significantly influence the overall atmosphere of the video game.

Video games are becoming considerably popular and captivating. Game developers can cram sophisticated graphics and interactive options into them. But visuals, game mechanics, and game audio are complex units.

It’s worth collaborating with a team of professionals who can do both: develop a video game and provide an excellent sound design. Since they know the specifics of the game and can incorporate all the elements into audio.

The work on the high-quality sound is not about surfing the Internet and finding stock sound effects. It involves clear thinking, planning, researching, and creating along with polishing sounds and making them fit the game’s world.

How to Make Sound Effects for Games?

We have an inclination to refer to sounds at the end of game development. It may enable us to refer to turnkey solutions when we work on our own game prototypes or certain video games.

But it is a bright idea to embrace the world of sound varieties and try out creating your own sound effects. It will help to keep the individuality and creativity of each sound.

Read also: How to Save Money on a Web Project for Businesses

To modulate sounds you should use DAWs (digital audio workstations) such as Reaper or Albeton. They can help you combine and layer sounds through volume automation, saturation, and pitch. It’s also worth using sound engines such as FMOD and Wwise. They will help you to adapt sounds to your gameplay and set the right logic.

How Much Does It Cost to Make Sound Effects for Video Games?

Read also: How Much Does It Cost To Create an App?

To make a sound estimation properly, you have to take into account the following influencing factors:

For instance, if you take the most popular and simple type of game like a hyper casual game, creating SFX will include the next features:

So the total time necessary for the sound development of a hyper-casual game is around 48 hours. With the average sound designer rate of $30 – $100 per hour, the sound design costs are expected to fall in a range from $1,440 to $4,800.

The importance of game audio is obvious. The thought-out sound effects help players to submerge into the virtual reality of the game environment. Sound effects make the player’s journey more exciting and enjoyable.

Sound design is an essential part of every game development workflow. Moreover, it’s crucial to create audio effects that can truly complement the game’s purpose.

Wanna make sounds engaging and suitable for your games? Feel free to contact us now!