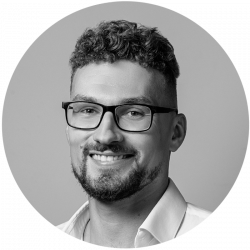 Slava Podmurnyi
CEO. 12 years of experience in IT. Wide expertise in management, business development, and software development. My dream is to make the world a better place with art and technologies.

Our goal was to make research & development and implement various simple and complex mechanics for remote collaboration in VR, in order to test them on the target audience. Due to such a goal, our team was hired only to perform research and development of those mechanics, and all the demo art was provided by the client.

The feature of drawing on the board with chalks required custom server-side and backend development, in order to provide persistence. In the case of internet problems or if everyone exits the room – the contents of the board needed to be stored. That’s why we implemented the logic which allowed us to constantly save the board contents without increasing network traffic.

The feature of desktop sharing was a challenge. Unity has no ready solution. So we made a research on best approaches to the problem and implemented the low-level C++ plugin for Unity for optimized desktop sharing using low-level Windows APIs.